Vitebsk: The Fight and Destruction of the Third Panzer Army 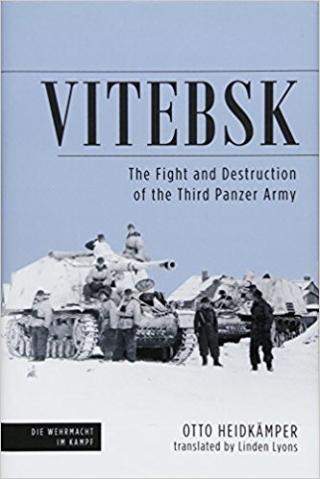 The city of Vitebsk in Belarus was of strategic importance during the fighting on the Eastern Front, as it controlled the route to Minsk. A salient in the German lines, Vitebsk had been declared a Festerplatz—a fortress town—meaning that it must be held at all costs. A task handed to 3rd Panzer Army in 1943.

Otto Heidkämper was chief of staff of Georg-Hans Reinhardt's 3rd Panzer Army, Army Group Center, which was stationed around Vitebsk and Smolensk from early 1942 until June 1944. His detailed account of the defense of Vitebsk through the winter of 1943 into 1944, right up to the Soviet summer offensive, is a valuable firsthand account of how the operations around Vitebsk played out. Twenty maps accompany the narrative. During this time, 3rd Panzer Army undertook numerous military operations to defend the area against the Soviets; they also engaged in anti-partisan operations in the area, deporting civilians accused of supporting partisans and destroying property.

Finally, in June 1944, the Soviets amassed four armies to take Vitebsk, which was then held by 38,000 men of 53rd Corps. Within three days, Vitebsk was encircled, with 53rd Corps trapped inside. Attempts to break the encirclement failed, and resistance in the pocket broke down over the next few days. On June 27, the final destruction of German resistance in Vitebsk was completed. Twenty thousand Germans were dead and another 10,000 had been captured.

Secret Passages in a Hillside Town

Комментарии к книге "Vitebsk: The Fight and Destruction of the Third Panzer Army"