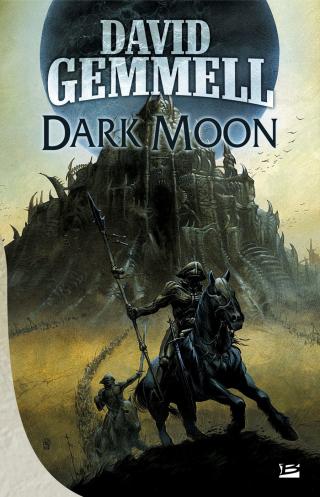 The peaceful Eldarin were the last of three ancient races.  The mystical Oltor, healers and poets, had fallen before the dread power of the cruel and sadistic Daroth.  Yet in one awesome night the invincible Daroth had vanished from the face of the earth.  Gone were their cities, their armies, their terror.  The Great Northern Desert was their only legacy.  Not a trace remained for a thousand years... The War of the Pearl had raged for seven years and the armies of the four Duchies were exhausted and weary of bloodshed.  But the foremost of the Dukes, Sirano of Romark, possessed the Eldarin Pearl and was determined to unravel its secrets. Then, on one unforgetable day, a dark moon rose above the Great Northern Desert, and a black tidal wave swept across the land.  In moments the desert had vanished beneath lush fields and forests and a great city could be seen glittering in the morning sunlight. From this city re-emerged the blood-hungry Daroth, powerful and immortal, immune to spear and sword.  They had only one desire:  to rid the world of humankind for ever. Now the fate of the human race rests on the talents of three heroes:  Karis, warrior-woman and strategist; Tarantio, the deadliest swordsman of the age; and Duvodas the Healer, who will learn a terrible truth. A new world of myth and magic, love and heroism, from the bestselling author of The Legend of Deathwalker.

The Nonesuch and Others