Ruby Under a Microscope 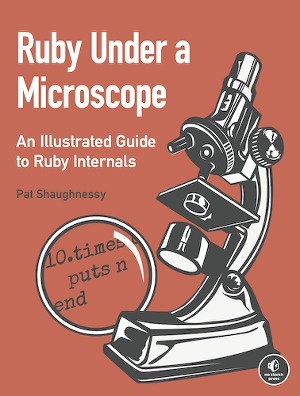 Ruby Under a Microscope gives you a hands-on look at Ruby’s core, using extensive diagrams and thorough explanations to show you how Ruby is implemented (no C skills required). Author Pat Shaughnessy takes a scientific approach, laying out a series of experiments with Ruby code to take you behind the scenes of how programming languages work. You’ll even find information on JRuby and Rubinius (two alternative implementations of Ruby), as well as in-depth explorations of Ruby’s garbage collection algorithm.
Ruby Under a Microscope will teach you:

How Ruby executes your code using a virtual machine

How classes and modules are the same inside Ruby

How Ruby uses grammar rules to parse and understand your code

No programming language needs to be a black box. Whether you’re already intrigued by language implementation or just want to dig deeper into Ruby, you’ll find Ruby Under a Microscope a fascinating way to become a better programmer.