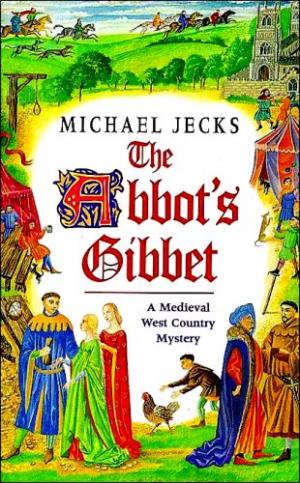 The year is 1319 and Tavistock's fair has drawn merchants to Devon from all over England and beyond. Keeping the streets clean and the locals in order is no easy task, for the influx of visitors and their money puts temptation in the way of cut-purses and other villains. But no one expects a murder, and butcher Will Ruby is stunned to discover a corpse - a headless corpse at that.
Former Knight Templar Sir Baldwin Furnshill, Keeper of the King's Peace, and Simon Puttock, bailiff of Lydford, have just arrived in Tavistock as guests of Abbot Robert Champeaux when the body is found. The crime falls within the Abbot's jurisdiction, and when he asks Simon and Baldwin to investigate, they can hardly refuse. But with an unidentifiable victim, they're badly hampered in their inquiries.
Nonetheless there's no shortage of suspicious behaviour to spur them on. Elias, the cook near whose shop the gruesome remains were found, clearly has something to hide. A surprisingly aggressive young monk has been behaving in an ungodly fashion. And the town is awash with strangers, any one of whom could be concealing a sinister past.
Can Simon and Baldwin unravel the complex web of intrigue that has brought death to Tavistock, as the undercurrents of anger and violence that lie beneath the bustling activity of the fair grow ever fiercer?