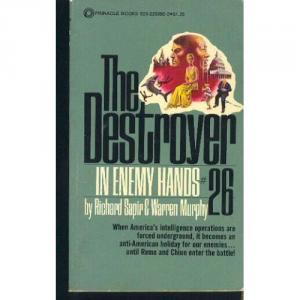 A congressional committee investigates abuses by America's spy network and winds up gutting our nation's intelligence system. Suddenly the Russians are having a field day; their special killer teams roam Europe at will. American spies turn up dead. In capitals around the world, meetings are held to plan the next anti-American escapade. American is defenseless before the rest of the world . . . Well, not quite defenseless. America's two secret weapons, Remo Williams, the Destroyer, and his incredible Korean teacher, Chiun, a master assassin, are being thrown into the breach. They are being sent overseas to start restoring some sense of safety and sanity to the world's balance of power. But the Soviets don't give up that easily. They have a secret weapon too, and when they unleash it, Remo and Chiun find themselves poised for a battle to the death . . . With each other!

Sherlock Holmes and the Adventure of the Greenbriar Ghost