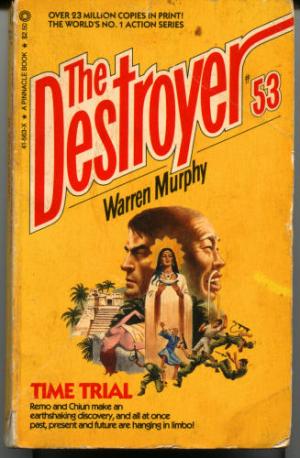 Strange goings-on in the Guatemalan jungles threaten to explode into an international incident when a team of American archaeologists disappear-after spotting secret weapons in the hands of barefoot natives.
Remo and Chiun are sent in to dig for the truth, aided by a beautiful blonde archaeologist. But in the depths of the jungle they make a startling discovery-just as the ground rips apart and swallows them whole.
When the trio sees the light again, it's a light that shined centuries before. And an ancient tribal war is threatening to switch it-and all that came after it-off forever. Our heroes have prevented wars before, but even if they escape from this fix alive, they're still at least a thousand years away from home...