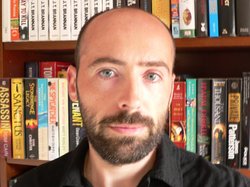 J.T. Brannan is the author of the Amazon bestselling political thriller series featuring Mark Cole (NEVER SAY DIE, BEYOND ALL LIMITS, WHATEVER THE COST and STOP AT NOTHING), as well as the high-concept thrillers ORIGIN (translated into eight languages in over thirty territories) and EXTINCTION (his latest all-action novel from Headline Publishing), in addition to the sci-fi action short story DESTRUCTIVE THOUGHTS.

Trained as a British Army officer at the Royal Military Academy Sandhurst, before deciding to pursue a writing career, he is a former national Karate champion and bouncer.

He now writes full-time, and teaches martial arts in Harrogate, in the North of England, where he lives with his wife and two young children.

He is currently working on the next novel in the bestselling Mark Cole series, as well as further books in the all-new Colt Ryder series.