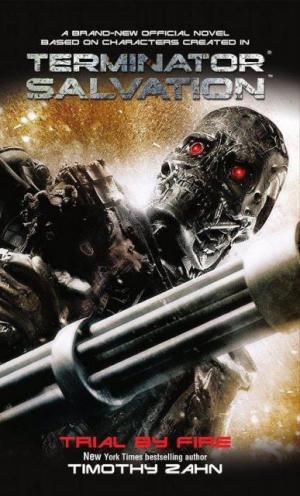 Trapped underground, Kyle Reese struggles to stay alive and prevent the ultimate Skynet infiltration. Amidst the ruins of the VLA lab, Resistance fighters Barnes and Blair sift through the remains of their fallen comrades, searching for the body of Barnes’s brother. On the forested slopes of the mountains, a man battles through the trees relentlessly pursued by a Terminator.
____________

Following the dramatic events of Terminator Salvation, a recovering John Connor grants Barnes permission to return to the destroyed VLA lab and bury his brother, killed in the explosive opening of the movie. At the ruins Barnes and Blair Williams hunt through the debris for the remains of their comrade but instead uncover a mysterious cable leading up into the mountains. The two Resistance fighters head into the wilderness to investigate.

What the pair discovers is an entire village that appears largely untouched by Judgment Day and its aftermath. Suspicious of the villagers, Barnes and Blair decide to dig deeper....

Terminator Salvation: From the Ashes